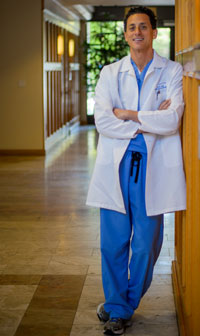 Dr. Tawfilis grew up in Northern California and graduated from California Polytechnic State University in San Luis Obispo with a BA in Biology. He then attended University of Southern California, School of Dentistry and received his DDS degree in 1994. He served in the US Navy as a dental officer in San Diego, CA. He spent time with the Marines at MCRD and then was stationed on the USS McKee as the Dental Liaison Officer at the Submarine Base in Point Loma. His interests in Oral and Maxillofacial Surgery peaked at this time and he went on to complete his residency in Oral and Maxillofacial Surgery at Highland General Hospital, University of the Pacific. After completing his residency training, he sought further training and completed a fellowship in Orthognathic and Cleft surgery in San Diego, CA.

One of Dr. Tawfilis’s special interests is humanitarian work locally and internationally. Dr. Tawfilis heads a surgical team that provides cleft lip and palate surgery to indigent populations in Mexico and Honduras. This is one of his passions and enables him to give back after his extensive training.

Dr. Tawfilis is also a father and husband. He has three boys and is happily married. He enjoys running, swimming, playing basketball and surfing. He volunteers at his children’s school and coaches their basketball and soccer teams.